The rainy season started some few weeks ago in Amhara and then the planting season is also starting up. The FLR Program has been sub-contracting the production of seedling to several nurseries owned by the local Office of Agriculture in different Woredas. The NFG team just visited the Chefakit nursery in Quarit Wore 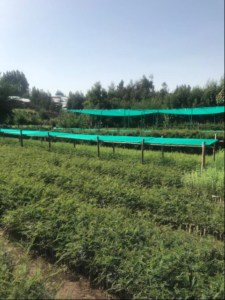 da in the Adama region to discuss progress of the production of seedlings.

The Chefakit nursery is managed very well, the head of the nursery Mr. Sharachew Birhan and the staff are doing a great job. The nursery is very well organised, the seedlings have a good quality and are ready for planting in the field. The nursery is testing some new shade cloth provided to them from the FLR Program, the results are very promising.

The main species in this nursery are Acacia decurrens, Chamaecytisus palmensis (Tree lucerne), Hagenia abyssinica, Yushania alpina (Highland bamboo), Cupressus lusitanica, and Rahmenus prinoides . Grevillea robusta is being produced on a nearby field managed by the nursery. The total production for the FLR Program is approximately 0.5 million seedlings.

One of NFG’s strategies for reforestation is to establish local nurseries. Short distances to the fields make it easier for the local communities having access to appropriate planting material.

Therefore, the project has established a small nursery in a selected area, namely Serawudi in the Amhara region. This region has been selected as a project area because it is particularly prone to deforestation and degradation.
And this year there has been full activity at the nursery. Here 700,000 plants were grown in greenhouses and released in three surrounding areas between June and August.

These become trees for the local farmers as a farm boundary plantions, supplemental plants in degraded forests, for small woodlots for local use and for some larger commercial plantations to generate economic value. And not least small trees, families can enjoy around their houses – preferably fruit trees, says Yeshanew Ashagrie Abitew, the local NFG project coordinator.

In Serawudi, Ehtnesh has placed two trees in her small “garden” of 10 square meters outside the house. She proudly shows off the small sprouts between chickens and hens, next to the basket with corn crop from her own field patch. It is harvest time in Ethiopia. The rainy season is just over and between September and November there is full activity on all arable land. In Serawudi, Ehtnesh and her friends Amaru, Belaynesh, Lime and Asnaku harvest both wheat and the local cereal teff as well as vegetables such as corn, beans, onions, garlic, and tomatoes. 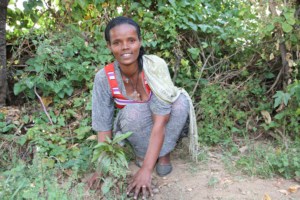 In own garden: In Serawudi, Ehtnesh has put two trees in her small “garden” of 10 square meters . Photo Line Venn