In early January 2021, The Mid-Term Review Report [MTR] of the Forest Landscape Restoration Program [FLRP] developed by the company SCANTEAM [Norway] was submitted to the program’s stakeholders and partners at different levels for comments, opinions, and reflections. The report is describing and highlighting the program’s efficiency through monitoring of implementation and impacts, management issues, sustainability, and relevance of the program. The report is also highlighting the lessons learned [what has worked well and what has not] as well as innovations, success stories and was concluded by recommendations.

Some substantial comments are developed by the stakeholders and partners, notably from RNE. Accordingly, it was agreed to organize a “Stakeholders Meeting” to discuss and clarify some relevant issues related to the MTR Report. The meeting was held on Monday 25 January 2021. The stakeholders located in Bahir Dar were linked with the other stakeholders in Addis Ababa [RNE, PASTPO] and Oslo [SCANTEAM and NFG-FLR Program Director] through Skype meeting application. The meeting was led by SCANTEAM and was an opportunity for discussing and clarifying several relevant issues aiming at improving the substance of MTR Report.

All the comments, suggestions and advices were taken into consideration by SCANTEAM. The adjusted MTR final report was recently submitted to NFG and RNE for additional comments/suggestions [if any]. It is planned that MTR report will be approved by NFG after having the consent from RNE [Beginning February 2021]. 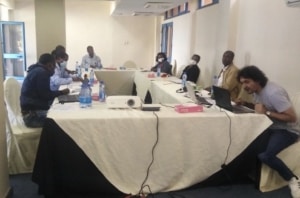